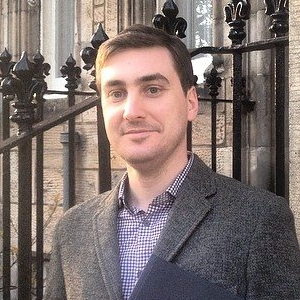 Noah Friedman-Biglin (Integral class of '05) recently completed a PhD in philosophy at the Arché Philosophical Research Center at the University of St Andrews, in St Andrews, Scotland, where he has been living since 2009.

His dissertation was entitled “Carnap's Conventionalism: Logic, Science, and Tolerance”, and in it he gave a defense of the conventionalist theory of logic and mathematics, based in the philosopher Rudolf Carnap's principle of tolerance.  While the work he has done so far is primarily historical, Noah intends to use the foundation laid there to continue work on a 'tolerant' foundation for mathematics.  The dissertation was supervised by professors Peter Milne (University of Stirling) and Peter Clark (St Andrews), and it was examined by professors Phillip Ebert (Stirling) and Richard Creath (Arizona State University).  Noah is looking forward to presenting some of the results of his work at the LOGICA conference this summer in Czech Republic.

Reflecting on his experience in Integral, Noah said, "My Integral senior thesis was a long time ago, but I think there's a real way in which I've never quite moved on.  In an sense, I'm still asking the same question - what is mathematics? -  though I use some more complicated words now.  There was something in Apollonius that grabbed me in the second year Math Tutorial and has never let go.  So, in this rather narrow sense, I certainly wouldn't be thinking about the things I am thinking about these days without my studying in Integral (for example, I imagine that I might not have gone this way if I'd studied philosophy at SMC instead of Integral).

"In a bigger way, though, there are two things I think Integral taught me that have proven invaluable as I've gone on in the academy.  The first is to read slowly and sympathetically (though that probably didn't shine through in my questions as a student).  That is, to try and really see what an author is getting at before coming to any judgements about it.  The second, which I think is related to the first, is to be comfortable with confusion.  If I don't understand something immediately, I find it more interesting, not less; if something initially strikes me as silly or implausible, I want to get to grips with it, and to see why other people might find it interesting or true."