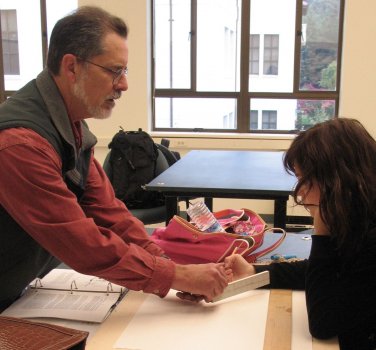 The Laboratory is a two-year program in which you'll learn through both reasoned discourse and hands-on observation and analysis. You'll use primary texts and replicated experiments to consider fundamental scientific questions throughout the ages, exploring the theories of Ptolemy, Copernicus, Kepler,Newton and Einstein. You'll follow the revolutionary thought and crucial experiments of scientists such as William Harvey in the 18th century and Watson and Crick in the 20th century. We do not believe that scientific studies and the humanities are distinct and autonomous learning domains — the integrity of scientific pursuits stems from all areas of intellectual life. Labs meet twice a week, with ample time for discussion and experiments.

The freshman laboratory engages students in basic activities of science: the description of the appearances of the natural world, including the phenomena of change. Description through measurement confronts students with the problem of devising instruments and procedures; how to create a straight edge for measuring length, how to measure the angular for distances between stars, how to make a system of clay weights using a meter stick as balance beam, how to measure time with water clocks and shadows. Questions are raised about the meaning and nature of measurement and about what it is that is measured. The classification and naming of phenomena are studied through observations of trees, tidal animals, and birds, the last concluding with an extensive report on a single species of bird based primarily on personal observation. Questions about the nature and bases of classification are raised: are species "natural" or are they human constructs? Questions about the nature of change are pursued in relation to time and to organic processes. Concurrently students begin to examine and to assess explanatory models in the work of Aristotle, Ptolemy, and Galen.

The discussion of the nature of scientific theory and the relation of theory to observation continues in the Junior Laboratory through readings in the foundations of modern mechanics, chemistry, and genetics accompanied by experiments that reproduce as far as possible the conditions under which basic discoveries in these sciences were made. The fall term focuses on the mathematization of physical phenomena. You'll begin with Galileo's work on strength and motion of matter, move on to the constitution of matter with readings from Black, Lavoisier, Dalton, Thompson, Gay-Lussac, Avogadro, Cannizzaro, Berzelius, Faraday, Mendeleev and others, and conclude with quantum theory. Spring term focuses on comparison of Neo-Darwinian evolutionary theory with physicochemical theories, beginning with Darwinian evolution and moving on to genetics with Mendel, Sutton, Morgan, Wilson, Dawkins and others.